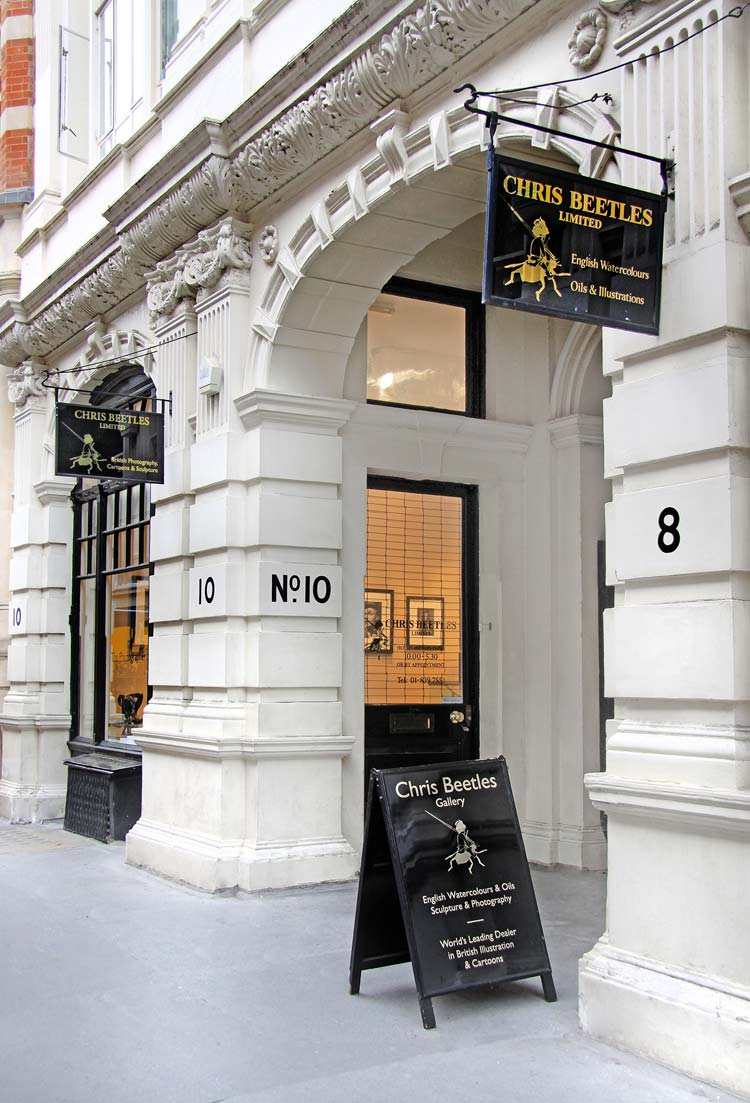 Written by Edwin Bartleet on 4th July, 2022. Posted in News

The artist and humorist William Heath Robinson was born 150 years ago on 31st May. To celebrate, Chris Beetles opened a new exhibition of Heath Robinson drawings and paintings at his gallery in St James’s. He was also in conversation with Geoffrey Beare, a leading light at the Heath Robinson Museum.

On 14th June, Chris Beetles held a reception to mark the opening of his exhibition celebrating 150 years of Heath Robinson, creator of preposterous and complex contraptions. More than 50 original pieces adorned the walls of the gallery, each for sale with prices ranging from £850 to £8,500, and representing the full length of his career from early drawings for the Works of Rabelais to wartime sketches.

Who better then to hold a discussion about the artist and his work at this milestone anniversary? In his opening remarks, Chris Beetles claimed that their lives had been ‘entwined, enhanced by Heath Robinson for decades’.

‘She’s Kind, and Ever Did Admire a Well-Fed Monk, or Well-Hung Friar.’ Heath Robinson’s draughtsmanship speaks for itself in this illustration from the Works of Rabelais, Gargantua and Pantagruel Chapter 5.

Delightfully disgusting
Nowadays, we associate Heath Robinson with complex machines, but his early art book illustrations were of a different ilk. Many of the pieces Chris Beetles managed to purchase were Heath Robinson’s illustrations for Rabelais’ stories. ‘The Rabelais is very important in the genesis of my empire. When I was buying everything I could possibly buy in the ’80s, I bought almost all those 100 Rabelais.’ He included 90 in a 1987 exhibition, alongside Robinson’s more recognizable contraptions. ‘The whole show was sold out but not one Rabelais. It scared the hell out of everybody… They’re bold, they’re rambunctious, they’re coarse, they’re funny, they’re disgusting,’ Chris Beetles enthused.

Geoffrey Beare also expressed his admiration for the Rabelais illustrations, admitting that he had given two to the Heath Robinson Museum but kept a more fearsome one for himself, which Chris Beetles described as portraying a ‘beastie biting into the skull’ of its victim. The pieces are large, too, resulting in books that are extremely big and heavy: ‘they are absolutely beautiful, and enormous, and actually nobody wanted to buy them because they couldn’t lift them.’ In short, Chris Beetles said, ‘this was publishing at its best, and most stupid’.

Stupidly successful
Geoffrey Beare explained that this so-called stupidity was a key element in Heath Robinson’s success. Robinson was lucky enough to be starting his career just as ‘photographic process engraving was taking over from hand wood engraving’. Books were now cheaper and faster to print, since there was no need for each illustration to be reproduced in a wood block by an engraver. Furthermore, what was printed on the page would be exactly what the artist had drawn, rather than an engraver’s copy of it, thus creating opportunities for artists to draw bigger and more detailed illustrations.

‘Our Grandfathers and Their Respectable Fiancées.’ Heath Robinson pokes fun at the ostentatious formality of a bygone age.

The new technology helped enormously when Heath Robinson turned from illustrating gift books to drawing quick-fire cartoons for high-society magazines such as The Sketch and Tatler. ‘The demand was enormous,’ said Chris Beetles, ‘and into this came this great young illustrator.’ Few artists could have kept up with the demand, but Heath Robinson ‘was up for it because his draughtsmanship was so good’.

In Heath Robinson we trust
Heath Robinson is thought to have produced up to 7,000 drawings and paintings, but he was modest about their value for posterity. ‘I may not have left you much,’ he said to his wife near his end, but the work of the Beares and Chris Beetles and the people of Pinner suggests otherwise: Heritage Lottery Fund money has been forthcoming to build the Heath Robinson Museum, the expression Heath Robinson has entered the dictionary and the value of Heath Robinson drawings has soared.

Geoffrey Beare states that just over 1,000 of the estimated 7,000 works now reside at the Museum. More than half of the Museum’s substantial collection came from Heath Robinson’s daughter, Joan. Upon her death, Joan’s husband asked Geoffrey and Geraldine Beare to help him keep the artist’s work in public ownership, and so the William Heath Robinson Trust was set up with around 500 items in 1992. Then in 2015, a year before the Museum would open, the Trust purchased the late Simon Heneage’s collection of 410 original Heath Robinson pieces, ensuring the Museum’s status as the largest collection of the artist’s work, and the only substantial public one.

The Museum has a permanent exhibition which covers the life and work of Heath Robinson and a special gallery where exhibitions change every three months. To celebrate 150 years of Heath Robinson, the special gallery focuses on his unique brand of humour. This display runs until September. Past exhibitions have featured his watercolour paintings and children’s stories, as well as the work of his brothers and that of other contemporary artists and illustrators. The museum is open from Thursday to Sunday, 11.00 a.m. to 4.00 p.m.

West House and the Museum have a beautiful lakeside setting. West House once belonged to Nelson’s grandson but was turned into a memorial for the fallen after the Second World War.

The legacy of Heath Robinson
When someone earns a place in the cultural pantheon, they tend to acquire the moniker ‘National Treasure’, but Heath Robinson deserves better, claims Philip Pullman, suggesting instead ‘Immortal Contraptioneer’ or ‘Mighty Commander of the Preposterous’. You can read his warm and generous appraisal of the artist in the Foreword to Very Heath Robinson, published by us. Here you will also find an analysis by the science writer Adam Hart-Davis of Heath Robinson’s place in the social and technological history of the modern world. For a succinct and magisterial portrait of the artist and what he has done for us, look no further. You can order your copy here.