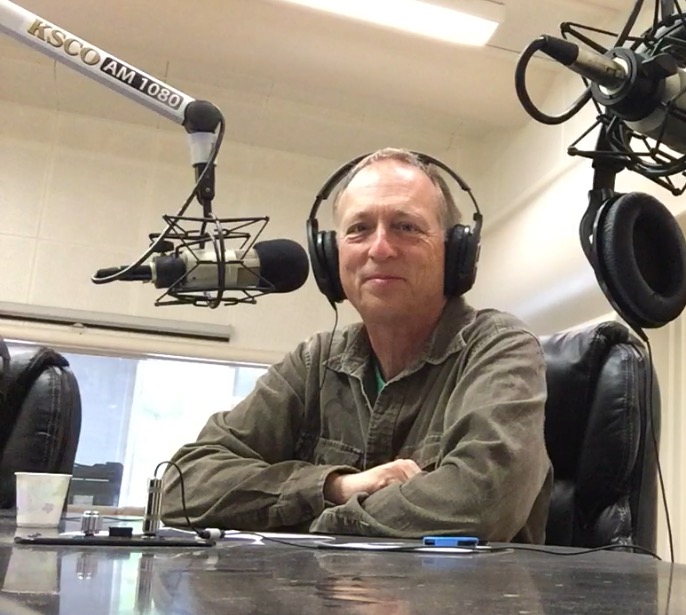 Written by Sheldrake Editor on 29th July, 2021. Posted in News

Gary Shapiro hosts the radio show From the Bookshelf, broadcast from the KSCO station in Santa Cruz. He has just interviewed Ian Logan and Jonathan Glancey about Logomotive, their new book on railroad logos and locomotive design. The podcast is up. Board now for a trip back in time.

We are going to talk about the golden age of American railroads, says Gary Shapiro, as he introduces the authors of Logomotive: Railroad Graphics and the American Dream. ‘I can tell by your speech that you guys are not Americans. Why are you interested in the American dream?’ This gets them going. All three recall memorable moments from the golden age of rail travel, when you could be on a train for days, when every company had its own local flavour, its own logo, paint livery, uniform and style, right down to the logo-emblazoned dishes on the tables of its dining cars.

Ian Logan got up at 5.30 one Christmas morning in the 1970s to take this shot of freight cars crossing the asparagus fields of Salinas Valley.

Ian Logan recalled how he used to stay with friends in Salinas, south of San Francisco, and get up early to photograph the trains crossing the valley. ‘The old station is still there,’ said Gary Shapiro, ‘like an old Western movie.’

What got Jonathan Glancey started on this railway romance, he said, was doing Route 66 and coming to the ghost town of Goffs on the top of the mountains. ‘You look down and you see freight trains struggling up this great desert, mountainous landscape. It’s thrilling. When the train comes up, you get five great growling diesel locomotives pulling an enormous freight train, probably a couple of miles long at least, and doing about five miles an hour at the top of the hill. Goffs, meanwhile, is completely deserted. Nothing happens there, except the trains go through. They used to stop years ago, the Super Chief, the Chief, El Capitan, to take on water. While I stood there in the shimmering heat, I could see in my mind’s eye the glorious Chief coming up with its air-conditioned cars, its cocktail bars, its restaurants, its Hollywood stars travelling across your great continental country. That is my way of trying to explain why we get excited by that American spirit.’

‘It’s all about the romanticism,’ said Ian.

Ian Logan Jonathan Glancey appear on the cover of their book.

Tune in now
You’ll be transported back to the golden days of rail travel when you follow this link: click From The BookShelf and you’ll get 17 minutes of pure romance. In the first part of the broadcast, Gary Shapiro interviews Jerry Mathers, star of Leave it to Beaver! He introduces Ian Logan and Jonathan Glancey 28 minutes 40 seconds into the talk.

Order Logomotive
To order Logomotive in the UK, click here. In the US and Canada, order direct from our Chicago warehouse or from local retailers.