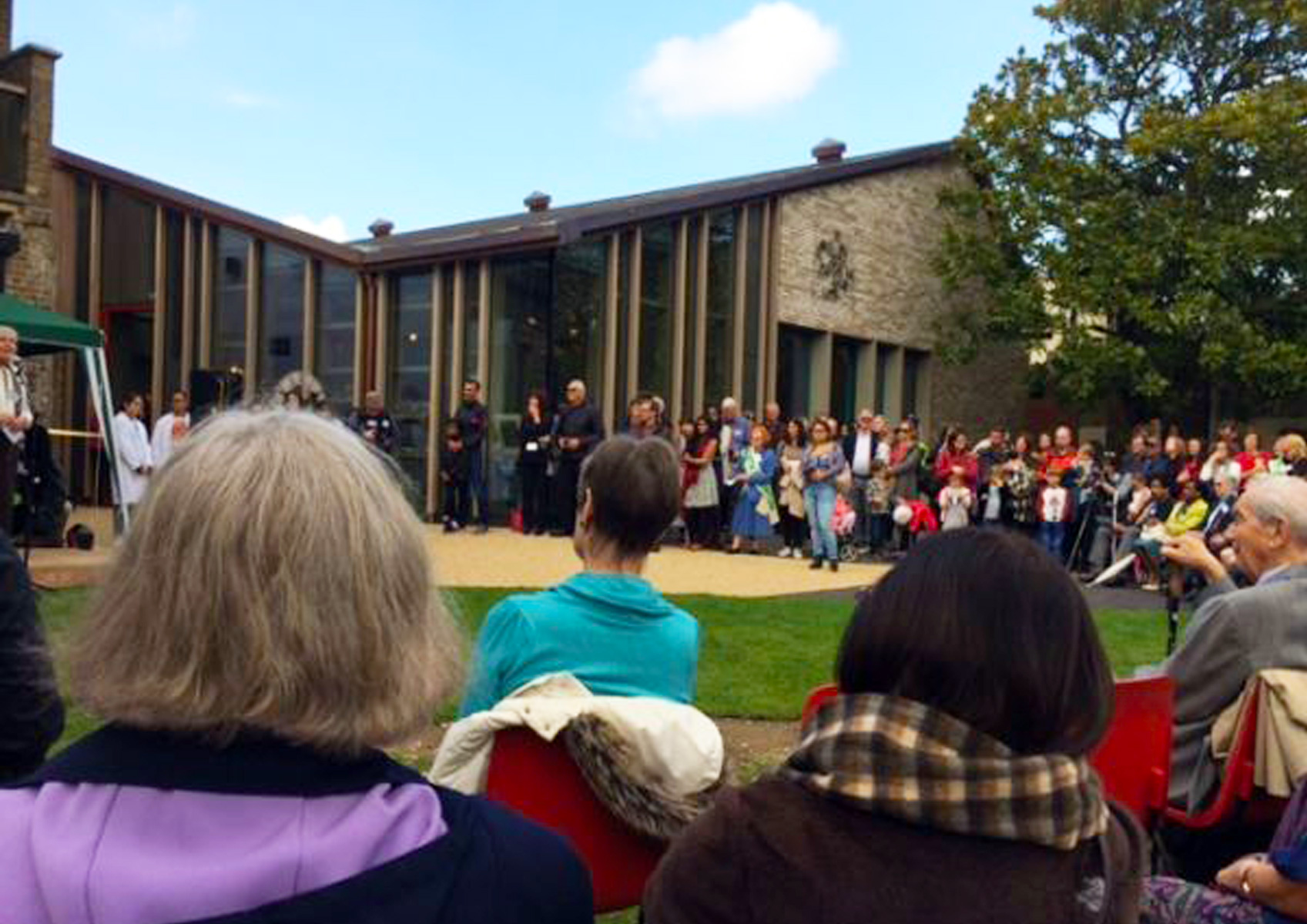 The opening of the Heath Robinson Museum on 15th October was a delightfully parochial event. That is to say, it took place in the parish of Pinner, which is a long way from central London, and had the feel of a village fête, complete with marquees and Morris dancers. But it was also an event of national and international importance.

The Heath Robinson Museum has been built as an extension to West House, a building with a conventional Victorian profile, balconies and sash windows. With its diagonal, dart-like roof line and tall plate-glass panels, the new museum has nothing in common with the existing architecture, but does not look too out of place. Modest in scale, it does not overpower the existing building.

Inside the main gallery are two tiers of paintings and drawings divided by one of William Heath Robinson’s urban horizons of roofs, steeples and trees. The upper images are all in colour and appear back-lit. The lower images are hung in white frames with accompanying captions, and on a shelf beneath them is the story of Heath Robinson’s life printed on a continuous scroll interrupted by display cases containing books and artefacts. Among the exhibits are a plate decorated with nursery-rhyme images and trial panels for the Knickerbocker Bar on the R. M. S. Empress of Britain, a luxurious Canadian-Pacific liner for which Heath Robinson painted murals. The ship was torpedoed in the Second World War. We have photographs of the completed murals and ceiling panels, but these are the only surviving originals.

The opening ceremony was conducted on the lawn sloping down from museum to the lake. Thanks to global warming, the mid-October afternoon was sunny and mild and no one had to take refuge in the tented encampments set up in readiness for showers. Daniel Edwards, a local artist brought up in Pinner, acted as Master of Ceremonies and introduced the speakers: Cynthia Wells, Acting Chairman of the West House and Heath Robinson Trust, Stuart Hobley, Head of the Heritage Lottery Fund for London, Rekha Shah, Mayor of Harrow, Peter Higginson, great nephew of William Heath Robinson, and Michael Rosen, Children’s Laureate and Patron of the Heath Robinson Museum Trust. Loud birdsong provided an accompanying soundtrack. I later realised these were the budgerigars singing in the aviary alongside the museum.  At one point an audience of pigeons assembled on the roof of West House, appearing to listen until scattered by an over-flying helicopter. I felt they symbolized Will himself, dropping in to see fair play. ‘I know that if Will was here,’  said Daniel Edwards, introducing Michael Rosen, ‘not only would he be astounded by what’s going on – he was a deeply modest, self-effacing man –  but I know he’d be bubbling with glee at the sight of Michael here, a fellow, joyful, concerned humanitarian.’

Michael Rosen, also brought up in Pinner, described how he used to walk past West House on his way to and from school, and how he played cricket over by the fir trees. On Tuesday nights his mother went to West House to do Scottish dancing, ‘as all Jewish mothers do’. He himself knocked out his front tooth go-carting in front of Heath Robinson’s house. His brother used to  entertain him in their bedroom reading the Professor Branestawm books, all  ‘beautifully and wonderfully illustrated by Heath Robinson. The number of times we looked at the burglar-catching machine nearly peeing ourselves with laughter, absolutely delighting and loving the Heath Robinson drawings’.

Michael Rosen had a serious point to make. ‘There’s a way in this country that we demote people who draw like Heath Robinson. Somehow or other they’re not like the great fine artists or great painters. We tend to call them by other words… cartoonist or something like that. This really overlooks something. Heath Robinson was someone who documented an era… and it’s as powerful and important as looking at a history book or reading a novel or indeed looking at great paintings.’

As we sat with the budgerigars and the ducks and the pigeons listening on the roof, among the Morris Dancers and the Pinner Association steel-band players, it felt as if we were a million miles from London. But there is nothing parochial about Heath Robinson or the Heath Robinson Museum, the first purpose-built museum to open in London in 40 years. This is a major event in the artistic and cultural life of the UK, capturing the brilliance of one of the few artists to have won an entry in the English dictionary. Heath Robinson is perhaps the person who has best captured what it was like to live in the early years of the 20th century when cars and ‘planes and flats and garden suburbs were transforming the way we lived. A trip from Baker Street, with its historic corridors and stairways, to rural Pinner, with its brand new Heath Robinson Museum, should be on all tourist itineraries, a modern Pilgrims’ Way for people coming from as far afield as Tokyo and Beijing, New York and Brazilia. For here is the analogue world of our fathers and grandfathers, captured in its quintessentially mechanical form, by one of the greatest and most loveable commentators of modern times. And a fine artist to boot, as the paintings on the walls confirm.