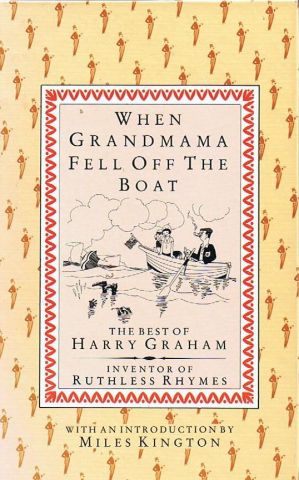 For the past two months we have been running a competition to find the best short poem in the style of a Ruthless Rhyme, a humorous verse form invented by Harry Graham. By the time the competition closed at midnight GMT on Sunday 4th March, we had received 65 rhymes from nine countries, including Australia, Germany, India, Nigeria, Romania, Spain, France, the UK and the US. The last entry came in at eight minutes to midnight.

1.    It should be between four and eight lines long.

2.    Ruthless Rhymes always rhyme, but not necessarily with the same rhyming scheme. Examples can be seen of ABAB and AABB rhyming.

3.    The poem should consist of two elements: a gruesome action by one character followed by a nonchalant response from another.

4.    The secret to a successful Ruthless Rhyme is the ability to relate commonplace situations with a sardonic twist. The poem should be a combination of lightheartedness and callousness.

When Baby’s cries grew hard to bear
I popped him in the Frigidaire.
I never would have done so if
I’d known that he’d be frozen stiff.
My wife said: “George, I’m so unhappé!
Our darling’s now completely frappé!”

The winner of the competition will have their poem published in our Blog. A selection of poems by runners-up may also be published on-line. The winner will then be invited to write further Ruthless Rhymes on seasonal themes throughout 2012, for publication in our Blog. If suitably qualified, the winner will be favourably considered for a six-month internship at Sheldrake Press, to start in 2012.

Contestants were asked to submit their entries by midnight Greenwich Mean Time on Sunday 4th March to , with their name, contact details and the subject heading Ruthless Rhyme Competition. The competition will be judged by our editorial staff and a panel of external judges, chaired by Simon Rigge. The result will be announced at www.sheldrakepress.co.uk on Monday 19th March 2012. Contestants who were graduates or were graduating in 2012 and wished to be considered for a six-month internship were invited to attach their c. v. to their entry.