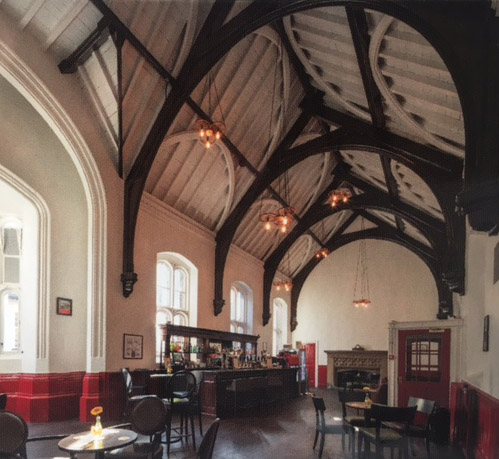 Truth and Beauty in Architecture

Written by Sheldrake Editor on 19th October, 2017. Posted in News

The Minister of State for Transport has spoken powerfully about the importance of beauty in architecture. Addressing the Advisory Panel of the Railway Heritage Trust on Monday, the Right Honourable John Hayes MP said that most of what we had built since the war should be demolished. A stunned silence descended.

Today is the bicentenary of the birth of Sir George Gilbert Scott, the architect who designed the Albert Memorial in Kensington Gardens and the soaring hotel at St Pancras station. The hotel re-opened on 5th May, with many of its original features restored.

As publishers of The Victorian House Book and The Railway Heritage of Britain, we are instantly alert to any good-news story about Victorian architecture, still the butt of modernist derision 30 years after the death of Sir John Betjeman, and few stories can have had such a positive slant as the re-opening of the St Pancras Hotel. Formerly called the Midland Grand Hotel, to reflect the aspirations of the Midland Railway, one of the last to reach London, it was the grandest of grand termini. Its architect, Sir George Gilbert Scott (1811-78), designed everything, right down to the chandeliers and the door handles. Abandoned by British Rail in 1985, it stood empty for 20 years. On 5th May 2011 it reopened as a luxury hotel. Excitingly, the decorators discovered the original wallpaper in what is now the Sir Gilbert Scott Suite, and it has been faithfully reprinted and reinstated, along with many other original details all over the building. The 1873 restaurant has been brought back to life as The Gilbert Scott. As the hotel historian Royden Stock has said, it is amazing that they have got it this right.

My own connection to the St Pancras Hotel goes back to 1983 when we published The Railway Heritage of Britain in association with the British Railways Board. The project was the brainchild of Bernard Kaukas, Director – Environment at British Rail;  he was the only contributor permitted to comment on the embarrassingly poor state of Britain’s railway architecture. In his piece on The Splendours and Miseries of British Rail’s Architectural Heritage, we showed a picture of the western tower of the St Pancras Hotel, freshly washed on his orders. The rest of the façade was left dirty. As the caption explained, it would cost at least another £1 million to finish cleaning the brickwork, and at the time it seemed a faint hope that even the exterior would be done, let alone the interior. As we prepared the book for publication, we spread out scores of 8 x 10 in. black and white prints from the hotel’s 19th-century heyday and gawped at the magnificence of Scott’s reception rooms, with antimacassars on the armchairs and chandeliers ablaze. We never imagined we would see this lavish magnificence faithfully recreated.

Shortly after the publication of the book, the Railway Heritage Trust was founded with financial support from British Rail, under the chairmanship of Sir William McAlpine. Luminaries from the worlds of railways and architecture became members of the Advisory Panel, and I was honoured to be invited to join them. In 1995 the annual meeting of the Advisory Panel was held in the dilapidated grandeur of the St Pancras Hotel, interrupted by a prolonged power cut. In the gloom of an October afternoon, we toured miles of silent corridors, peering into empty bedrooms where the soot spilled out of abandoned fireplaces. Encouragingly, we were shown that beneath each floor there was a cavernous crawl space through which, in principle, modern wiring and plumbing could be routed. The question was, could any investors be found to take on such a daunting and extravagant project?

Now we have the answer. The hotel is once again open, and next week, following a hard-hat inspection of the engineering works in progress at King’s Cross, I will once again ascend the grand staircase and tour the St Pancras Hotel, this time occupied by guests and refulgent in all its Gothic splendour. I doff my hat to Sir John Betjeman, who sounded the call to honour and preserve our Victorian heritage. Thanks to him, we can still celebrate and enjoy some of our greatest 19th-century architectural achievements, including this one on the bicentenary of Sir George Gilbert Scott’s birth.

There is a very good BBC news report, including a clip of Sir John Betjeman touring the St Pancras Hotel, and you can see it by clicking here. It is also well worth watching Tim Hayward’s review of Marcus Wareing’s new restaurant at St Pancras, The Gilbert Scott. If you are up for some bureaucrat bashing, read Simon Jenkins in The Guardian.

To see pictures of the re-opened St Pancras Hotel, please visit our Facebook page (below) and click on Photos. 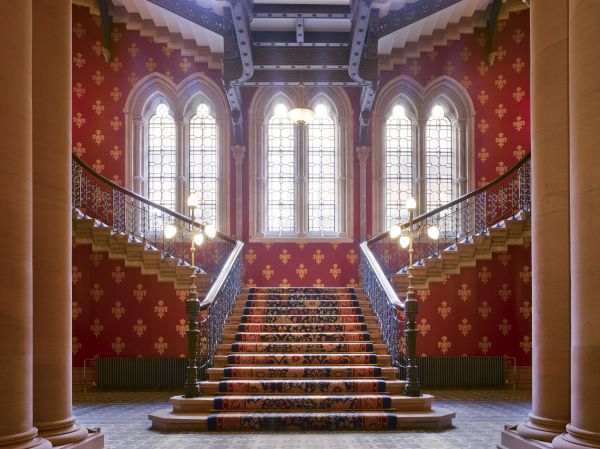 Today is the bicentenary of the birth of Sir George Gilbert Scott, architect of the Midland Grand Hotel at St Pancras, re-opened this year and featured today as a Google Doodle.

Sir George Gilbert Scott is perhaps best known as the architect of the Albert Memorial in Kensington Gardens and the Midland Grand Hotel at St Pancras station. The hotel re-opened on 5th May 2011, with many of its original features restored. This is an achievement we could only dream of when we featured the hotel in The Railway Heritage of Britain in 1983. If anyone is still unconvinced of Scott’s standing as an architect, may we suggest a walk up his grand staircase at St Pancras. There is more on this subject in our Blog, and you can see an album of 21 photographs on our Facebook page.